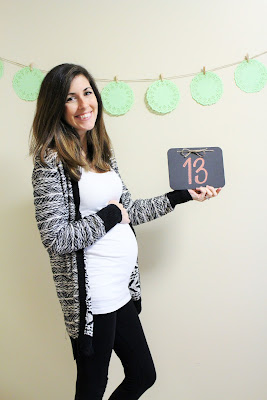 Here it is! The first official bumpdate for Baby B2.  I really wish I would’ve started once I announced, but it’s been a trying few weeks and there’s been a lot going on.  All is well though and I’m excited to be able to blog about B2’s journey in my belly.  So, before we get started, let’s ignore a few things.  Let’s ignore the fact that my hair is rained on and I was too lazy to curl or straighten it, so a quick brush through it was.  Also, let’s ignore the fact that I only have on mascara so I didn’t look too dead in this picture.  If we can over look those minor details then we’re good.  I promise I’ll do better next time.

In case you missed it! Baby B2 is a BOY!  We are so shocked as all signs pointed to girl, but nonetheless we are very excited!  We found out through a blood screening.  I did find out there are some inaccuracies, but they do seem to be rare. However, we just found out there are a few factors in our pregnancy that may lead to an inaccuracy, so we’ll have to confirm at the Anatomy Scan.  But, that is an entirely different post for a different day.

Now let’s get down to the nitty gritty.

How far along:  13 weeks, 3 days
Total weight gain:  So far just a pound.  The first trimester has been a rough one, so I’m just thankful I didn’t lose any weight.
Maternity clothes:  Not yet, although I don’t change out of PJ pants unless I absolutely have to so I mean, there’s that.
Gender?  Boy! We’ll confirm at the anatomy scan.
Stretch marks:  Not yet, although my belly is definitely bigger already by this point than it was with Mykenzi.  I’m just hoping we’re as lucky as we were with her with no stretch marks!  I’m using Coconut Oil this time instead of Palmer’s Belly Butter so I’m interested to see if that makes a difference.
Sleep:  Is kind of crazy!  I’m having some of the strangest dreams!  Like, really strange.
Symptoms:  My sense of smell is something fierce, way more sensitive than with Mykenzi.  I’ve been crazy emotional and I’ve probably cried more in these 13 weeks than I have in the last two years.  And my lady lumps are incredibly sore, which a Toddler who uses Mommy as a jungle gym doesn’t quite get.  Ouch.
PEAK of the week:  We are about 95% certain we’ve settled on a first name, but we are 50/50 on the two middle names we have picked out.
PIT of the week?  Rain.  It has seriously been raining non-stop since Christmas and it is just so depressing.  Not to mention, makes for a stir crazy Momma and Toddler.
Big Sister:  She’s doing great.  I’m not sure if kids are like pets and can tell you are pregnant but she has been super cuddly and super clingy in a cute way.  She will climb on the couch and lay her head on my belly and say, “Awww.”  I die every time, it’s way too cute.
Daddy:  He’s doing okay, I think.  I’m sure trying to juggle my crazy is a lot, but he does it with a smile on his face … and he feeds my all my favorite things so who can be mad at that?
Miss anything:  Red Meat.  I want nothing more than a juicy burger and I just can’t do read meat yet.
Movement:  I’m not sure.  Everyone says you can tell earlier the second time around but I still can’t decipher if it’s movement or gas.  I’d like to tell you it’s movement, but I’d hate to lie to you and just be really gassy this pregnancy.
Food cravings:  Sweet Tarts, Reese’s Pieces, and Chocolate Milk, which is weird because I hate Chocolate Milk.  Also, I’d give my left arm for some Pixie Sticks and I can’t find them ANYWHERE!
Anything making you feel sick or queasy:  Red meat and water!  Oh, water is so heavy and I HAVE to drink it.  It’s the worst.  Oh, and poopy diapers.  I lose my marbles every time I have to change one.
Belly button in or out:  Flat, although I don’t think I’ll be as lucky as I was with Mykenzi, I think it’s gonna pop this time around.
Happy or moody:  I’d say more moody than happy, but more emotional than moody.  I’m all over the place, but there is so much going on and being really sick has been hard.  I’m ready for the Second Trimester and hopefully feeling as good as I did with Mykenzi.
Looking forward to:  The next appointment and hopefully our anatomy scan will be 4 weeks after that.
There are so many similarities between this pregnancy and Mykenzi’s that I’m still shocked its a boy! Between morning sickness, sweet cravings, food aversions, and a high heartbeat we were certain we had another little lady on our hands.  Apparently, my body just reacts the same way to pregnancy no matter the gender.  I’m excited to see just how much this pregnancy stays similar to Mykenzi or if it will eventually veer off on it’s own track.