I have written many reviews in this little space of mine, but I don’t think I’ve written one as important as today. This may be a product review post, but really it is more personal than anything.  Also, I would like to take a moment to say that I don’t typically put companies on blast, but I’ve also never had a company physically harm my child either, so in this case, I feel it’s justified.  Plus, I think this is something every parent needs to read.

Grab a drink, this one is lengthy.

I have been a loyal Honest Company bundler for 2 plus years.  In fact, I was always a big Honest advocate.  I never got to partner with them in this space, but I’ve always highly recommended their products to everyone. I’ve even gifted their products to many new Moms.  Well my friends, that stops today.  I will NEVER recommend Honest Products to anyone EVER again, and I damn sure will never let the Honest Company get another dollar of my hard earned money.

A few months ago, right before their wipe recall, Rowan got sick and was put on antibiotics.  I always dread antibiotics because I know they just tear his poor little tummy up, which results in the most awful poopy diapers.  As we started the antibiotics, the loose poopy diapers started to roll in.  We noticed upon changing Rowan that he had these horrendous red, raw splotches across his bottom and all over his “twig and berries.”  It would literally break my heart to have to change his diaper because he would let out a blood-curdling scream of pain anytime I changed him. The day we would finish the last dose of antibiotics would never come fast enough.  I’d lather him in coconut oil and that would spare him the pain until the next change. This happened both times he’s ever been on antibiotics, so naturally, I assumed this medicine was the devil.  Plus, combined with his allergies, we figured he would always have a hard time with antibiotics.  A few days after he finished his antibiotics, Mykenzi woke up crying about her “butt” which is really her lady parts.  We’re still working on the difference. Haha.  And of course, one kid can’t get sick without the other following suit.  She would stand with her legs crossed, holding her diaper crying out, “my butt! my butt!”  I automatically assumed it was a UTI, since this has also happened several times.  Diapers, little girls, and hot summer months aren’t a good combination for those types of things, so I changed her and got ready to head to the Doctor.  After I changed her she went right back to normal, playing, running around, it was like nothing was ever wrong in the first place, so I held off on the Doctor to see it play out.  A few hours later, it was the same song and dance.  She was hysterical and screaming about her “butt.”  When I looked her over I never noticed anything but a slight topical redness, but everything else seemed to be fine.  I finally started putting two and two together and noticed it was always after a wet diaper.  Could it be the diaper? Naaaah. We pay a premium for “safe” diapers, surely that is not the issue.  A few days passed and she seemed fine, but then we noticed both kids’ diapers started smelling funky when they urinated.  We figured we needed to up their water intake. It’s hot outside, so they could easily be getting dehydrated, right?  We literally questioned everything, but the diapers until I opened a new pack of diapers from our bundle and got a huge whiff of a chemical type smell.  It was so pungent!  I asked my husband to smell them since I can smell things from miles away.  He started to get close and he looked at me and said, “Is that the diaper?” Y’all, this man can’t smell crap! Literally. But really, he doesn’t smell things that well, and even HE could smell the pungent chemically smell of these diapers.  Then it was like something out a movie, my thoughts clicked, and I flashed back to every single diaper episode we ever had and said, “OMG. The diapers!” These diapers have literally been BURNING our kids’ private parts!

I felt so dumb for never questioning the diaper before, but they were from the Honest Company, so I thought they were like the safest diapers on the planet. Fuming, betrayed, and heartbroken, I immediately went to the internet to find a safer option, and that’s when I found Parasol Co.  On Parasol’s site it states, “We believe that safe and eco-conscious baby products should be a given – that’s obvious. What’s missing is a commitment to go even further.”  That statement resonated with me.  It was exactly what the Honest Company didn’t do.  They claimed to create a “safe” baby product, but they failed to back that up with commitment to keep it safe.  Parasol has taken the brash and bulky out of the safe diaper and delivers an incredibly quilted soft diaper for your baby.  The difference is undeniable when you see them both in person. Parasol is so incredibly soft, and they own their commitment to safe by promising a hypoallergenic, chlorine-free, latex-free, lotion and fragrance-free diaper  that is artistically painted with ink free of lead and heavy metals.  Now, I know what you’re thinking.  You’re thinking well, the Honest Company says that too, right? Right. But, this is where actions speak louder than words.  In the weeks we’ve been using Parasol’s diapers we have not had one episode of Mykenzi screaming her bottom hurts, and neither kid has had any redness in their nether regions.  I thought maybe we had just gotten a faulty bundle and I’d flown off the deep end by jumping ship to another company, but here’s the kicker, we just spent the last week with the plague in this house.  Every member of the family was on antibiotics, so naturally we prepared ourselves for a scream fest of diaper changes with Rowan.  Y’all, I am not even kidding when I tell you this …. While the antibiotic still messed with Rowan’s stomach giving us some pretty juicy diapers, he did not have one single patch of redness. Not one.  Not only that, we had zero blowouts, and with Honest, every antibiotic diaper was a blowout diaper.  Do you know how huge that is?! SO BIG! So, this whole time we’ve been afraid of an antibiotic that was instead a diaper burning him raw.

Can you spot the difference? There is no question Parasol is a better quality diaper.

Now, as you can imagine, I am freaking livid at the Honest Company, but more importantly, I’m so thankful for a company like Parasol that I can truly trust.  I’m so much more confident in the product that will be next to my children’s most sensitive parts, and I will recommend Parasol Co. to every single parent I know because I am a total believer.  I know you must think that it’s easy to be a believer when this is a product review post, right? Well, that’s where you are wrong.  While this post is intended to be a product review, and I did receive some perks, I am an actual Parasol subscriber and do purchase my own bundles.  The perks were simply that, a perk.  I am so wholeheartedly an advocate for this company that I choose to spend my own money to be able to have their product in my home. A product that fits, that’s well crafted, and safe. A product that I can trust.

If you are an Honest user, I would be cautious.  I’m not saying this is happening to everyone or all their diapers are faulty, but I have been in contact with several Mothers who experienced the same issues I did, and because deemed safe, never questioned the diapers either.  Like I stated above, I do not care to bash other companies, but this is a scary issue that all parents need to be aware of.  Diapers that burn your children raw are INEXCUSABLE and UNACCEPTABLE.  I have not been able to get in touch with anyone via phone, and all attempts to reach Honest through social media were sugarcoated through comments and then left unanswered when asked to email or DM them. Shame on them. They lost an amazing customer, but I gained an even more amazing company.

Thank you Parasol Co. for not only living up to the standards you state online, but also being genuinely interested in the well-being of my children.  I’m not just another customer, I have been treated like family, and that means more to me than you’ll ever know.  I only have one regret in this situation, and it is that I wish I would’ve found Parasol Co. sooner.

Interested in Bundling with Parasol? Check out their bundle deals here: 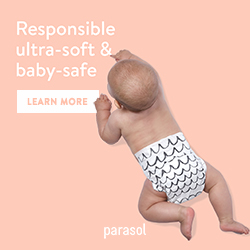 This post may contain affiliate links, thank you for supporting the brands that support Jen & Juiceboxes.